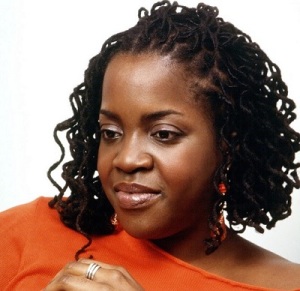 Carla Cook is daring. She is a jazz singer/songwriter who sings standards beautifully — but she doesn’t stop there. Cook is willing to put a jazz spin on songs not written by traditional jazz composers. Songs that, until you hear her sing them, you’d never imagine could be interpreted as jazz. This native Detroiter, who grew up in a musically rich and diverse environment, brings all her influences to bear within her repertoire. In her songbook you’ll find elements of R&B, European classical, Motown, Blues and Gospel. Cook has always eschewed labels, and refuses to become a jazz purist or snob. That willingness to simply sing what she loves, bringing an earthy sophistication to every song, is what gives Cook her signature style. In 1999, Cook recorded her debut album; It’s All About Love. The CD enjoyed favorable reviews and received a Grammy nomination in the Best Jazz Vocal Performance category and was awarded the AFIM Indie Award for Best Jazz Vocal in 2000. In 2000, Cook recorded her second album, Dem Bones and in 2002, she recorded Simply Natural, both for MAXJAZZ. Her albums continue to receive critical acclaim.