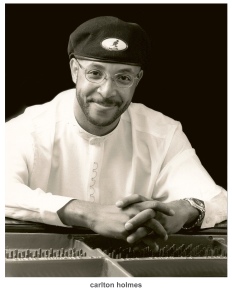 Carlton Holmes is a pianist of exceptional talent, musicality, and creativity. His sensitivity and inventiveness has allowed him to be one of the most sought after musicians in the New York area. Carlton Holmes’ career in New York began after he completed his Masters degree at the Manhattan School of Music. He found himself playing diversified gigs, and soon became known as one of the ‘Young Lions’, playing with drum great Charli Persip for six years and beginning what is now a fifteen-year relationship with Master drummer Michael Carvin. Along with extensive studio work Carlton also composed and performed for many film and television productions as well as Broadway. In addition to leading his own bands, Carlton’s performing and recording credit includes work with Lionel Hampton, Freddie Hubbard, Kenny Garrett, Branford Marsalis, Max Roach, Stevie Wonder, Diane Reeves, Regina Belle, Donald Bryd, Terumasa Hino, and many others. Carlton continues to play and record with drum sensation Cindy Blackman, saxophone great Carlos Garnett and guitarist Ronny Jordan.