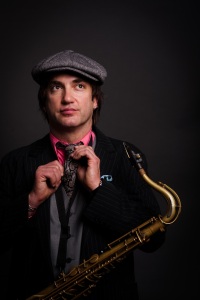 A product of the Berkeley Schools’ pioneering Jazz Project, multi-instrumentalist, Peter Apfelbaum began performing professionally while in his early teens. Apfelbaum aligns himself with the “structuralists” (Braxton’s word), like Braxton himself, Henry Threadgill, Roscoe Mitchell, Steve Coleman, Dave Douglas, Karl Berger, Ed Wilkerson, Tim Berne, Doug Wieselman, Carla Bley, Warren Smith, Julius Hemphill, Leo Smith, Arvo Paart, Sam Rivers, Ron Miles, Oliver Lake, Gina Leishman, Pierre Dorge, Bob Moses, John Zorn, Anthony Davis and others who, in the aftermath of the explosion of musical structure in the sixties, are putting the pieces back together in different ways. “My vocabulary reflects the fact that I started life as a drummer and was trained as a sub-teenager in jazz theory, blues, gospel music. As a teenager, I was inundated with jazz, African and Latin music, was involved in group improvisation on a regular basis, listened to a lot of 20th century classical music, worked in R&B, reggae, blues, Latin, African, Jazz, Funk, Middle Eastern and Indian bands, and for as long as I can remember, have been fascinated by how sounds fit together.”