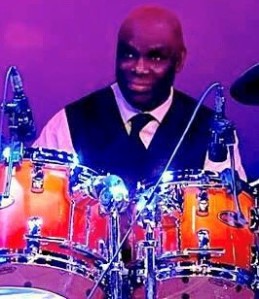 ‘My defining moment in choosing to play the drums came from watching cats and listening. My dad, who used to play himself, was always bringing home Down Beat magazine so I would look at all the drum ads with Max Roach, Louie Bellson and Ed Shaughnessy of the Tonight Show band fame, Bernard Purdie, Jack DeJohnette, and Billy Cobham. One particular visual for me was watching the movie “The Glenn Miller Story” with James Stewart from 1954. There’s a scene where he’s performing (or acting like he is) in a little club jammin’ with Louis Armstrong. In the club there’s another drummer, the great Cozy Cole playing. Another drumming legend Gene Krupa, who played with Miller in real life happens to be in the club. So, the two start playing together on the same kit. While Cozy is sitting down on his own kit, Gene stands next to him playing his floor toms. The way these two got on while playing and created such a lovely little melody/groove on the kit, I was mesmerized, to say the least. In fact, it was inspiring to me to want to continue playing once I saw this.’