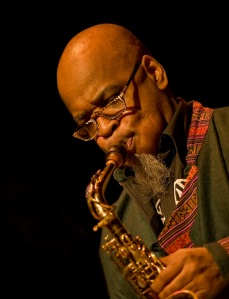 A unique innovator in the idiom of creative music, Jorge Sylvester’s sound is reminiscent of another time in jazz history when artists like Dolphy and Ornette were exploding on the scene and experimenting with concepts that would ultimately revolutionize music at large. A throwback to the future, Mr. Sylvester has been on the cutting edge of that scene since 1980 when he first came to New York City. His blend of African-Caribbean rhythms with new music is what gives Sylvester his distinguished voice. An impressive composer and arranger, Sylvester has performed with Stefon Harris, Rodney Kendrick, Karl Berger, the David Murray Big Band, poet Sekou Sundiata, the Black Rock Coalition Orchestra, the Oliver Lake Big Band, Kuumba Frank Lacy’s Vibe Tribe, the Next Legacy Orchestra, Joe Bowie’s Defunkt Big Band and Nora McCarthy, with whom he also co-leads several groups, namely The ConceptualMotion Orchestra and A Small Dream In Red. Mr. Sylvester performs frequently and conducts workshops through out the United States teaching his unique approach to composition using Afro-Caribbean rhythms.