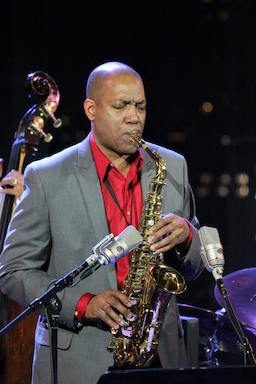 Saxophonist, Eric Person is a renowned performer, composer, arranger and bandleader; who over the years has had the good fortune to experience a variety of fulfilling musical situations with the masters of modern music consisting of McCoy Tyner, Dave Holland, Donald Byrd, Sam Rivers and Chico Hamliton, just to name a few. Eric’s music has far reaching harmonic and melodic beauty which is delivered with cutting edge intensity. His music transcends the common terrain of contemporary jazz. As a saxophonist, he takes his alto and soprano saxophones into the stratosphere with soaring solos that reveal the element of surprise, a sought after lyricism, only surpassed by his unfettered imagination.

Eric Person’s 10 CD releases under his leadership on Soul Note and his own Distinction Records label have all garnered great reviews from the critics. In Jazztimes, Critic Bill Milkowski reviewing his Rhythm Edge CD called Eric “a risk-taking improviser, accomplished composer and inveterate swinger.” Critic Russ Musto of All About Jazz Magazine while reviewing his Live at Big Sur CD said, “Person is more then fine; he’s a major talent of his generation.”